This blog will be taking a break while I’m travelling in Japan.

We thought long and hard about getting a website for our company.  We did not delude ourselves that online advertising would usher in a flood of new business.  In the past, media marketing had attracted very little new work.  In all likelihood, business would continue to flow from the usual sources: referrals and repeat customers.

On the positive side, the website would be a virtual resume, a place where prospective clients could find out more about us, the work we did and our other clients.  A website would mean dispensing with updating brochures, a tedious and expensive chore.

On the negative side, there was the risk of increased exposure to trolls, tyre kickers and freeloaders.

We bit the bullet, hired a web designer and had a professional photographer take mug shots.  Our web designer, Sean – whose other life is one quarter of an Australian bluegrass band called The Pigs – put together a professional looking site and added a device to screen out the trolls.  Several months later, we went live.  One freeloader managed to sneak in under my radar – swine! – after which I resolved to treat all unknown inquirers with scepticism.

I make exceptions for relatives.

In early March I noticed a number of hits to my blog from Canada.  This was followed by a web inquiry from one Gail Copeland who appeared to know enough about my family for me to strike up a conversation.   Gail’s relationship to me is through her connection to the Silverstone family, as per her comment below.

After a few exchanges involving family updates and the correct spelling of Tabetha’s name – she with whom I was so fixated during a visit to London in 1971 – we gravitated to the topic of Sabbath candlesticks.  We each have a set.  Gail knew exactly where hers had come from, their date and place of manufacture.  I knew nothing about mine other than that they had originated in my mother’s household.  And that sorely needed a polish.

I set about cleaning them before presenting them in public.  Corinthian columns and filigree work might be great to look at, but removing the dirt from their surfaces is time-consuming and finicky.

Half way through the clean up job (there are no prizes for guessing which candlestick I did first):

Gail had given me the links to various websites to help interpret the significance of the stamps at the base and underside of each candlestick. 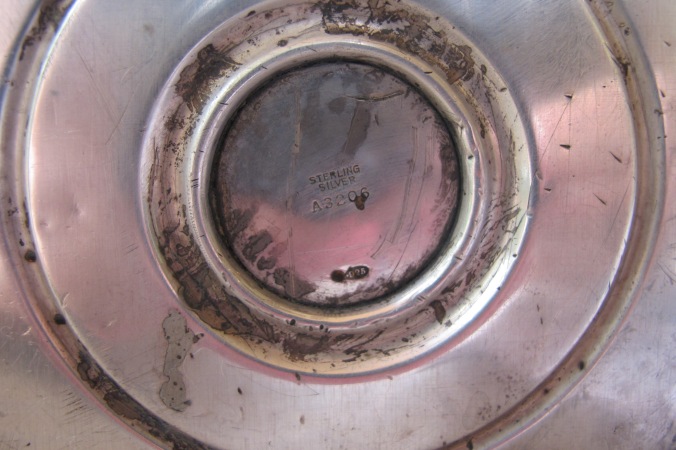 I let Gail know and she sent me a few more links to Gorham’s date code and American silver.  Several searches later, I was none the wiser about my candlesticks’ history.  Gorham proved to be a red herring and mostly because I was not reading the hallmarks correctly.

I turned to my sister – whose knowledge of antique silver is far greater than mine will ever be – for help.   She confirmed that the candlesticks had belonged to our maternal grandmother and dispelled any notion that they were of US manufacture.  This was because Gorham and other American makes are most often stamped “sterling” and nothing else.

It appears that my candlesticks were made in Britain. 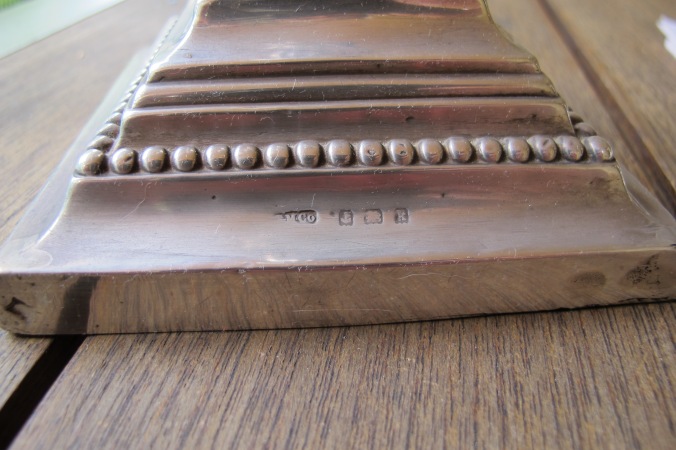 British hallmarks are usually sequential, showing the initials of the artist or factory, a symbol of the guild, a lion or monarch’s head and a letter signifying the date (year) of manufacture.

Unfortunately, the manufacturer’s symbol at extreme left is too worn to decipher.  Perhaps someone can help me out here.

The anchor symbol suggests a Birmingham manufacturer.  The lion symbol indicates the purity of the silver (.925).  The letter “k” at extreme right, written in lower case, suggests that the candlesticks were manufactured in 1909.

Getting a website wasn’t such a bad idea after all.

research in space and spatialities in art, philosophy, literature and politics

The Introvert's Guide To Japanese Culture

Genealogy and family stories throughout South Australia and across the seas...

Documenting and sharing our year away in Asia

The professional genealogy and family history company with a proven track record and fast growing reputation across the globe. Be it local, national or international work, no project is too large or small. Family trees, old photograph restoration, heir hunting, tracing long lost relatives... and beautiful, personalised handbound books for your future generations to treasure forever. www.heir-line.co.uk

Maybe someone should write that down...

Come with us; it's gonna be great!!

Come view the world in my loft

Living the life of the common people.